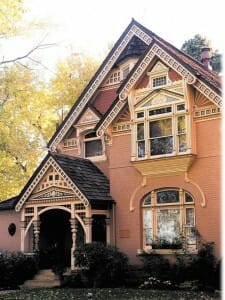 San Francisco’s painted ladies have been the beauty queens of the Victorian set for decades, but they’ll win no prizes in the authenticity category. Unlike those tarted-up facades of the Bay area, original Victorians were as drab as dirt … literally.

“Victorian color schemes were originally buffs, fawns, browns, ochres, russets, greens and ecrus,” says James Martin, owner of The Color People, architectural color consultants. “The taste was mandated by Andrew Jackson Downing, a tastemaker and Victorian landscape architect. His tenet was that houses should be natural to blend in with the environment.”

There were practical reasons behind the dreary palette, as well. Since colors were made by grinding organic matter, such as rocks and roots, dark colors were a natural. Bright colors, on the other hand, were expensive to produce and faded quickly.

Original Victorians were not as fussy, either. For example, Martin says, it was rare to see dentils — the tooth-like squares in cornices — painted in contrasting colors.

“More often porches, cornices, brackets and windows were highlighted quite simply, and sunlight and shadow were relied on to accentuate smaller details.”

Athens homeowners today often ask for an authentic palette, expecting, Martin says, not the drab colors true to the era, but the vibrant shades associated with the painted ladies. Those colors, Martin says, are actually “more psychedelia than Victoriana.”

“I can do painted ladies … they work great in resort areas. But on most peoples’ streets in Athens, they don’t look that good. It’s like wearing a tuxedo to a barbecue. And the other people in the neighborhood aren’t going to feel good if your house is wildly divergent.”

The key to creating a beautiful Victorian lies somewhere between the flash of the painted lady and the grace of her original sisters.

Also, Martin says, take color cues from the trees and shrubs near your Athens home, as well as the houses around yours, especially if they’re close.

Athens homeowners today often ask for an authentic palette, expecting, Martin says, not the drab colors true to the era, but the vibrant shades associated with the painted ladies. Those colors, Martin says, are actually “more psychedelia than Victoriana.”

“If you’ve got a yellow brick house, you are probably not going to want to have gray trim. They don’t go together. If you have a red brick house and a red-brown roof, then you are going to have to use colors that counteract all that redness — perhaps a taupe color that runs a little green to contrast the reddishness of all of that.”

When selecting paint, start with the body color, keeping in mind that a dark body makes a house look smaller and a light larger. Next, pick a trim color, then the sash, secondary trim, secondary body and punch colors.

There’s no limit to the number of colors that can be used, but it’s important to use only as many as it takes to delineate all the pieces of the architecture. And remember, Martin says, details should always be secondary to the whole.

“People get overwhelmed by all the detail at first, but if you start to study it, you’ll see there was a system in order — that what happened in one place typically happened in all the other similar places. And that’s a key to managing your details.

“I always feel like doing a Victorian house is like meeting someone for the first time. You want to make a good impression and that good impression will tell you quite a bit about the house … the level of taste, what’s it like. But you don’t want to hear their life’s story right off the bat. A house with too many details or too much contrast is like that. It’s throwing all that information at you right off the bat. Ideally you want to spend a little time with the house and discover the interesting things about it.”

Painting a Victorian can be a huge undertaking. Contact your Athens painting contractor to handle the job with minimum fuss and inconvenience.